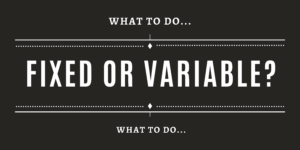 Here we are once again at a cross road to either lock in or remain in your ultra low variable rate mortgage.

Basically we are sitting at all time historical lows with mortgage rates. We have never seen the Bank of Canada reduce rates to this level which in turn affects the Prime rates which is what the banks charge. We have also never seen fixed rates (driven by the bond market) as low as they have been for the past 18 months, however they have already moved back to pre-pandemic levels. The media tends to make out that the sky is falling in situations like this, however it is far from that. Any rate under 3% is phenomenal.

As inflation has risen, the Bank of Canada has announced that they are going to slowly start to bring rates back to where they were pre COVID. The start of the pandemic forced them to reduce rates in order to keep the economy moving. Analysts are predicting (remember no one has a crystal ball, not even your best friend, neighbor or coworker) that we will see the Bank of Canada start to raise rates anywhere from early to mid (most predicting mid) 2022.

When that starts to happen, that will affect Variable Rate Mortgage holders and rates generally go up in .25% increments. If the Bank moves too quickly, it would have another negative effect on the economy which they try to avoid. We are anticipating that the rates will return to a more normal level in the next 24 months which allows home buyers and home owners to take advantage of ultra low rates until that time if they remain in a variable rate.

When choosing between a fixed and variable rate in today’s market, I always suggest taking a mortgage that will not keep you up at night. For those that stress at the sheer thought of a possible rate increase, perhaps a fixed rate mortgage is better suited. For those that want to take advantage of the extreme savings and pay your mortgage off sooner, a variable rate may be a better choice. We also look at the down payment amount and equity in the home as well as cash flow. If someone can withstand the payment increases that may come with a variable rate, then it may be a good choice. If someone is living paycheck to paycheck and barely qualifying, a fixed rate mortgage may allow a bit more security knowing that your payment will not change over the next 5 years.

My best advice is to take a mortgage that allows you to sleep at night, whether due to knowing your payments won’t change, or because you are paying your mortgage off 10x faster in a variable rate. There is really no right or wrong answer, it’s about the borrower’s comfort, and remember, no two borrowers are the same. More than anything, let me help reduce your stress over this process and reach out so I can look at your personal situation and help you make the best choice.