The Bank of Canada released the September 2021 rate announcement this morning. We have put the statement from BoC below.

The Bank of Canada has kept its key interest rate target steady at 0.25% as expected in its latest rate announcement, noting rising cases of COVID-19 in many regions as a risk despite the continuing global economic recovery.

The announcement reaffirmed the Bank’s projection that interest rates are likely to begin rising in the second half of 2022, the time at which it expects its 2% inflation target to be sustainable.

The Bank also announced that it would maintain purchases of government bonds at its current pace of $2 billion per week, with its Bank rate held at 0.5% and the deposit rate unchanged at 0.25%.

The decision to stay the course on the benchmark rate had been widely anticipated as Canada continues to grapple with the economic uncertainty of the COVID-19 pandemic.

A muted statement from the Bank was also expected with the country currently in the midst of the ongoing federal election campaign, with Canadians set to go to the polls on September 20.

The Bank’s statement arrived a week after some stark economic news for Canada, with the country’s national statistics agency having reported that gross domestic product fell by 1.1% on an annualized basis in the second quarter and the economy most likely shrank by 0.4% in July.

In its statement, the Bank acknowledged that Canada’s second-quarter performance had been “weaker than anticipated,” with the GDP contraction primarily reflecting a decrease in exports and the return of the housing market to more normal levels of activity, “largely as expected.”

Our team is always available to speak with you about the different mortgage programs as well as any other financial goals you have and how this announcement will work with your goals. 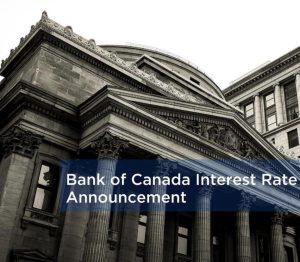